Welcome to our new world of programming.
python programming language for beginners…….
What is Python programming language
What Is Python?
Python refers to the Python programming language (with syntax rules for writing what is considered valid Python code) and the Python interpreter software that reads source code (written in the Python language) and performs its instructions. The Python interpreter is free to download from http://python.org/, and there are versions for Linux, OS X, and Windows.
The name Python comes from the surreal British comedy group Monty Python, not from the snake. Python programmers are affectionately called "Pythonistas", and both Monty Python and serpentine references usually pepper Python tutorials and documentation.
How to install python on windows:
This procedure is for windows only:
First click On Windows icon, select  Start▸ Control Panel▸ Systemand check whether System Type says 64-bit or 32-bit.
You’ll find Python installers for 64-bit and 32-bit computers for each operating system on the download page, so first figure out which installer you need. If you bought your computer in 2007 or later, it is most likely a 64-bit system. Otherwise, you have a 32-bit version, but here’s how to find out for sure: 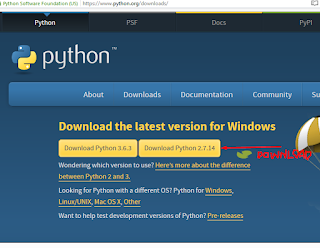 After that You can download Python for Windows for free from http://python.org/downloads/. If you download the latest version from the website’s download page, all of the programs in my example should work.
Note download latest python 2.7 version
On your Windows, download the Python installer (the filename will end with .msi) and double-click it. Follow the instructions the installer displays on the screen to install Python, as listed here:
1.      Select Install for All Users and then click Next.
2.      Install to the C:\Python27 folder by clicking Next.
3.      Click Next again to skip the Customize Python section.

Starting the IDLE
While the Python interpreter is the software that runs your Python programs, the interactive development environment (IDLE) software is where you’ll enter your programs, much like a word processor. Let’s start IDLE now.
On Windows 7 or newer, click the Start icon in the lower-left corner of your screen, enter IDLE in the search box, and select IDLE (Python GUI).

The Interactive Shell.
No matter which operating system you’re running, the IDLE window that first appears should be mostly blank except for text that looks something like this:
Python 2.7.4 (v3.4.0:04f714765c13, Mar 16 2014, 19:25:23) [MSC v.1600 64
bit (AMD64)] on win32Type "copyright", "credits" or "license()" for more information.
>>>
This window is called the interactive shell. A shell is a program that lets you type instructions into the computer, much like the Terminal or Command Prompt on OS X and Windows, respectively. Python’s interactive shell lets you enter instructions for the Python interpreter software to run. The computer reads the instructions you enter and runs them immediately.
For example, enter the following into the interactive shell next to the >>>prompt:
>>> print('Hello world!')
After you type that line and press ENTER, the interactive shell should display this in response:
>>> print('Hello world!')
Hello world!
Now you are good to go………….
How to install python on android.
Go to playstore search for an app called “python for Andriod” and download it .
Open the app and type this command
Print”hello George”  click the play button and see your output.
Note we are making use of python 2.0 version and above.
We will be discussing about the following in our next chapter:
Entering Expressions into the Interactive Shell
Operators & Comments
The Integer, Floating-Point, and String Data Types……
Variable Names
Assignment Statements
Do enjoy yourself and feel free to ask any question by dropping your comment and asking questions in our social media group like facebook, whatsapp, google +.
thanks
Short URL